Which song are you referring to?

I m in same situation. I gave my back. What kind of amp are u using now?

I’m using the Lyngdorf TDAI-2170. By some considerable distance the best amp I have ever owned, sounds absolutely sensational.

I’ve just received a SA30 for Christmas and it sounds great (just like my AVR-850).

I immediately upgraded to build 867 and there are clearly distortion problems with higher resolution files 24 bit/96KHz and above.

I have experienced this using TIDAL with MQA but also on high resolution FLAC files via my network drive.

The real concern that I have is that as the SA30 has been out for over 1 year, has this distortion problem always been apparent in every firmware version or is this a new issue?

If the distortion problem that manifests itself on higher resolution files is a new issue, it probably can be fixed in software/firmware but if it has always been there, it may be a physical hardware problem.

I am an avid Arcam fan and have purchased Arcam equipment for over two decades, so will not simply bail, unless it can’t ever be fixed!

If the distortion problem that manifests itself on higher resolution files is a new issue, it probably can be fixed in software/firmware but if it has always been there, it may be a physical hardware problem.

As I understand it, the problem arose in software version 1.33 (Build 705). There are several who have returned to version 1.21 (build 521) where ditortion is not a fact for them. I hope and believe that this problem will be solved in the future, but the experience of how quickly they come up with new software versions is unfortunately not so good. Welcome to this forum (Aventador_SVJ).

Hi Aventador, welcome to the forum! There are several topics which report distortion:

The first one is reported to Arcam and will be reviewed once they are back from Christmas leave. If your situation is different from the two mentioned topics then I advice you to create a new issue. If it resembles your situation then comment on the related topic with relevant details (steps executed, be precise on used sample frequency and bit resolution).

I have now contacted my dealer to return my SA30. They want to check if there is a hardware failure on it and also contact Arcam before a repurchase. Does anyone here have any experience of how Arcam stands to admit that the problems with SA30 are a software error? It’s very sad to have to do this, but all the problems with my SA30 make it impossible for me to claim to have it left.

I have just checked and the distortion issue is repeatable.

Whilst I did do a Network and System reset and I have 1 DIRAC filter enabled, I do see an odd symbol to the right of the MQA: 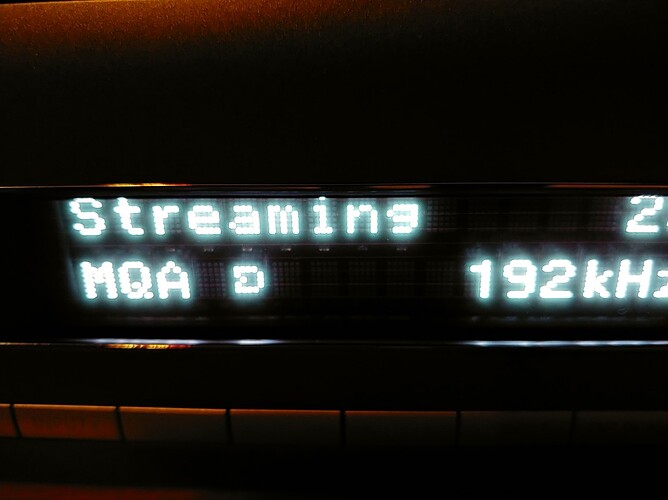 Any ideas what this reverse pacman symbol means?

That is the Dirac symbol, you are using a Dirac filter that is being applied after the MQA unfolding and decoding by the Arcam. It seems to me Dirac is directly related to the distortion problems. I am streaming this morning via Roon Tidal MQA and have not heard any distortion. But I have not reloaded any of the Dirac filters after resetting the Net and System.

Thanks Ken for the explanation of the Dirac symbol.

I’m slightly lost for words on how Arcam have released this with the distortion issue, as testing with high resolution music files would have been in their primary testing.

I’m not sure what to do next?

How long has the distortion been a feature of this amplifier (i.e. Pierre stated 1.33 (Build 705) but when was this released?)

I’m not sure what to do next?

Join the freakin club!! The problem for me is I want Dirac, Roon Ready, and sweet sounding Class G amp all rolled into one. There is nothing else out there that I have found that has all of these features. I would be fine with a nice class AB amp instead of Class G if it is strong enough to drive my Sonus Faber Extremas properly.

How long has the distortion been a feature of this amplifier (i.e. Pierre stated 1.33 (Build 705) but when was this released?)

The distortion started for me with Build 705 back in August I believe. I did not get a chance to listen to build 521 because the amp updated to 705 the next day after I bought it in August.

My requirements are Class G (or equivalent), DIRAC and ideally SABRE DACs.

I could purchase a separate streamer, as the streaming is a nice to have with the SA30.

I looked at the SR250, which satisfies two out of three of my requirements and would have used this with a separate streamer.

Ken, you’ve put up with the distortion since August?

Ken, you’ve put up with the distortion since August?

Yes. It was manageable by switching to an analog source and then hitting play in Roon. But the latest firmware has been worse about starting distortion. I really like the sa30 when it’s working right. I was holding out for this latest firmware to fix it and get the Roon Ready certification. I was let down. Ugh.

So, what is the answer, to go back 1 or several firmware versions?

The issue is fundamental to the very foundation of the amplifier, one which over 90% of the target audience will encounter on a day to day basis.

There were some issues with the AVR-850 firmware but the issues were relatively minor and for people that have a 5.1 setup like me, do not affect the day to day use at all.

This forum only has a small number of subscribers discussing the SA30. I wonder how many units have been sold worldwide. I have this picture of many other purchasers suffering (maybe) in silence or returning their units. I would love to see the Arcam inbox from frustrated customers.

I would love to see the Arcam inbox from frustrated customers.

If you look at this answer that I got from their support, you can easily understand that there are many such frustrated customers that you are talking about.

“Our dealer network is employed by us as the first port of call for support as they tend to be in a position to offer instant support, whereas any one day we have 200+ people to respond to”

Unfortunately, I’m one of those who will return my SA30. I have their AVR390 and am happy with it, but buying a product from them will probably not be a first option for me in the future.

The problem there though is that whilst that creates a buffer between the end user and Arcam support to help them manage their case load, the reality is the dealer has no better idea than us and can’t offer a solution. Talking to the dealer alone would create more frustration for the user in my opinion and would end up with many more people returning their amp. I do get the sense that many on forums like this are more technically minded than average, and the average user would give up more quickly on this amp.

After more testing using MConnect Tidal via UPNP on the SA30, I have heard distortion on the following music file types:

I have looked into the Lyngdorf streamers and they do not meet the technical specifications laid out by the SA30 (e.g. Lyngdorf TDAI-3400 has vastly inferior DAC and amplifier performance - ref Audio Science Review).

The only real alternative from a technical (and hence absolute) perspective is the SR250.

Also, I wonder if the SA20 has the same issues? - if not, the distortion is almost certainly related to either DIRAC or the streaming aspect.

Really not sure what to do?

I have looked into the Lyngdorf streamers and they do not meet the technical specifications laid out by the SA30 (e.g. Lyngdorf TDAI-3400 has vastly inferior DAC and amplifier performance - ref Audio Science Review).

Listen before you judge

First of all measurements do not tell the whole story, and second I have already seen some messed up measurements on ASR. Seems he is using same, not entirely correct, methodology to all devices (famous Denon AVR case, or… Arcam AV40).
In case of Lyngdorf it’s hard to say about DAC and amp, as… whole amp is a DAC

It’s one of the few fully digital amps.
As for SA30, it has annoying bugs. But to be honest there’s so few similar devices ticking all the boxes (all-in-one with room correction and HDMI), in the same price range, that for me it makes no sense to get rid of it. I can really live for some time with necessity to change source 1-2 times per day, or having to use remote to set correct volume (since it doesn’t work correctly in Roon, once max volume is set). I know those are software bugs, and will get fixed, hopefully sooner than later. Yes, it is annoying and I am pissed off at Arcam. I have a hard time understanding why it takes so long to fix bugs in what really is a simple device.
BUT I don’t see a real competition for SA30, especially if one is looking for class G or AB amp. SR250 is a striped down AVR, and for me definitely is not something I would consider after having SA30.
So for me I have to quote “a classic” - “patience my young padawan”

Haven’t seen any reports on distortion on SA20, but it’s much more simple device. Software is there only for control (inputs, volume, display etc). There’s no streaming and any kind of signal processing. DAC in those devices is quite simple implementation of ESS chips, with software controlling only filter selection (filters are built in the chip), so it’s definitely not DAC causing the issue, it’s software part of streamer or DSP.

After more testing using MConnect Tidal via UPNP on the SA30, I have heard distortion

I’m able to reproduce the distortion while playing hi res tracks from my nas. Neither Roon nor Dirac is involved. I submitted the following ticket.