Try to change System Code from the Menu . You can navigate from the buttons on the Amp.

Thank you @iarvanit !!! That was it. I must have changed that by accident when I was fiddling around in the menu when the update took ages to take.

Does anyone have the issue that the amp sometimes just switches to other inputs without pressing any buttons?
Mine switches from NET to Phono and back sometimes withouth any buttonpressing. Feels like magic, except it’s not as fun

I have not seen this. Is there other gear in the room that might be causing interference? Maybe you could turn off everything else and leave the Arcam running for hours and see if it happens. I will watch for it! Thanks for letting us know.

unfortunately i notice some interruptions from ARC .
No as much as before but it still here.

ARC dropouts are not fixed in this build, as mentioned in the release note of post 10:

Dropouts have not been resolved in this build. The engineering team know of this issue and are working towards resolution.

Arc sound drops is the last major bug for which I hope a resolution in the coming weeks ! After that I’ll finally start enjoying my amplifier to its full extend (as it should have been from day one) and play with Dirac

Yes, I noticed this immediately after the unsollicited upgrade to v1027 (ota upgr was disabled). Playing from Musiclife or Qobuz app it stopped playing and input switched to CD.
This happened several times.

How do you know or how to get system to show Roon Certified?

Distortion is not completely gone. Compared to build 867 it is much less frequent en less loud.
Today I was playing from Qobuz (using the Qobuz app) for several hours and noticed it twice while playing 96Khz tracks. Last one was The Torture never stops from Zappa. In this context the title describes my mood now…

Roon used to indicate in the signal path when Dirac was being used by the SA 30. This indication in Roon disappeared a month or so ago. I thought it might reappear after the SA 30 became certified, but it has not. Is this something that is no longer supported by Roon or Arcam?

Is there any update from ARCAM about the distortion or are we going to return the units to the dealers?

Unfortunately no updates. We are all waiting eagerly.
Hope Arcam haven’t came across any issue, that cannot be resolved, but that silence is a bit worrying…

If they can’t fix it via firmware they would have to do a product recall or refund everybody as far as I see.

I agree, although it would be a shame.
Let’s wait for any update from @arcam_paul

Hi folks, I posted an update in another thread here.

Been searching the forum and I am wondering if there is some qobuz issue or not. Just seeking other views rather than immediately raising an issue.

When I start a stream form Qobuz it takes maybe a minute or two before playback actually starts. On odd occasions for which I can’t say there seems to be much consistency playback will stop then restart later.

I’ve only recently started to go to Qobuz and considering it seriously instead of tidal because I’m gradually realising I’m never certain what I’m really getting with lossy MQA and likely it’s not worth the premium over lossless hi res Qobuz. That is a whole other discussion, BUT I’ve never had tidal do this.

This problem is with the amp streaming, not Airplay or chromecast which would not support hi res formats.

Listening direct on a device to Qobuz using their app there is no pause when starting playback at all, it’s immediate.

So is this normal? Sounds like a little thing but pretty annoying tbh.

Here you go, just been playing this album for about 28-29 mins and it just decides to stop for about a minute at the start of this track 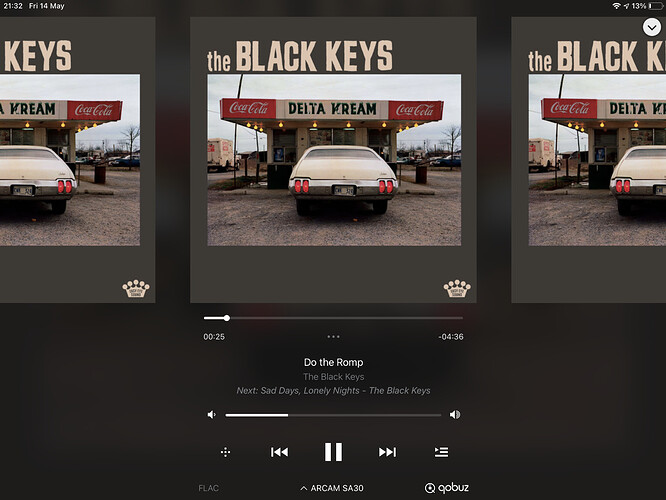 And it’s just done it again at the end of this track, MusicLife is still showing the mini graphic EQ animation on the track in the playlist, but nothing happening been about 3 minutes now and nothing happening, not sure whether it will restart this time.

Nothing else going on on my network other than me posting this message. I don’t have the fastest broadband in the world, but plenty good enough for this, I can stream full Netflix DolbyVision no problem at all and as mentioned I don’t get these pauses with the Qobuz app. In fact when it does pause, I can flip to the Qobuz app and select the track where it’s got stuck and start playing it on my iPad immediately.

Just also tried flipping across to the web client and it is not showing the track as playing. I tapped the play icon and the icon kept flashing as the track position slider started jumping up at maybe 20 second intervals until it got about a minute into the track and started playing about 10 seconds then stopped again. Then went back to Music Life and managed to start it ok from beginning of the track……for now at least….

Gave up in the end as it gradually got worse from there, switched to tidal stream for remainder of album, no problems.

However, after a couple hours listening tonight about 3 albums worth I got the distorted sound this was listening to Bob Dylan’s rough ‘n’ rowdy ways.