This MusicLife app is a total disaster

There is something I don’t understand at all… I just got the SA30 believing that the app is good for something… it isn’t. This app is a joke and I can’t believe it after 2 years that this thing could be so damn bad!

Basically every single action that I am trying to do, which would work everywhere else (other apps) - doesn’t work here or works only partially. Is there anyone who actually is using this crap and is happy with it?

It would be best if I find a solution for this because I really don’t want to sell the amp, but a streaming amp with no streaming app is basically not very useful.

There is no other viable way to use this amp. The app is as important as the amp itself!

What is your suggestion for not using the only app that is actually communicating with the amp? Have you seen BluOS app and the way it is integrated into the supported hardware?

I already know what you’ll say “Use Chromecast”.
That is working only partially. Tidal can’t use Chromecast because MQA is not possible.
Casting Deezer is an option but not a very good one since it seems to have a problem with iOS when using Chromecast.
Chromecast would use my phone battery which is not why I paid the big money for the device!

There are no other solutions…

Use Bubble Upnp. You can stream without Chromecast (transcoding) as far as I know.

I get three options with Bubble:

Choose the SA30 logo and enjoy.

Forget about the Musiclife app. Although the only problem I have with Musiclife is that scrolling through favorites stutters and stops all the time…

Well my biggest issues are the lack of Shuffle and the fact that big playlist can’t be added to the queue. I’ll definitely check your suggestion right after I submit this post.

Can I use the Bubble for Tidal/Deezer or it is basically for local files?

Thanks for your time!

I use it for Qobuz hi-res.

Thanks but I need it for Deezer which doesn’t seem to be supported. Anyhow, someone might find this useful.

I think mConnect supports Deezer, and it should also work with SA30 using UPnP protocol.

Hi, yes it does support it and I did try its free Lite version yesterday. Can’t yet comment on it much except that it didn’t seem any more convenient than the MusicLife.

Well, for me none of those apps are really convenient. At least i preferred mConnect over Bubble when i had to use them.
From my experience majority of native apps for streamers are rather poor, with some exceptions like BluOS devices.
That’s why i rely now on Roon, but planning to move to Tidal Connect once it’s released. For other services like Deezer or Spotify Chromecast is good option. Never notice battery drain, and as far as i know Chromecast is not transcoding, but i might be wrong.

Hi, Is there any hope for such plans, to make Tidal connect for SA30 in the future?

I have it (latest update) working fine on iPhone 13, iPad Pro, and on a spare Android phone. Main source is Plex Media Server (where I keep my FLAC/HD/UHD) audio. Wired connections between SA30 and Media server. Faultless operation now (2 versions ago it was … less good). Actually 2 tiny issues - can take 10 seconds to load my 200,000 track library and the first track won’t load from standby unless you start the whole album.
I don’t use playlists / .m3u files as they rarely play nicely across my devices.

How does it load playlists from Deezer/Tidal?
Does the shuffle work and remain activated instead of deactivating in 2sec?

I had problems with these… didn’t quite test local files playback since these are mostly mp3s.

I use HiFi cast. because of the issues i have with this app. Tracks will just stop mid way, the app will tell me there is a track playing on the SA30 but it’s just sat there doing nothing. Sometimes i can’t play anything and have to unplug the amp to get the app to connect. I used to own a Cambridge Audio Stream Magic 6 which had a terrible app when i first got it, but they made massive improvements within a year. I am really regretting selling that and the A38 and getting the SA30.

I really hope there is a massive improvement in this software very soon. Just ask the guys at Cambridge audio what they did

I am really regretting selling that and the A38 and getting the SA30.

Don’t be. When it comes to software there are alternatives, however in your previous setup you have not had any alternative for Dirac Live

Just ask the guys at Cambridge audio what they did

Well, it’s not like they are far away from each other

For me the app is very stable and I mean very stable. I’ve never ever had any interruptions with it (Wifi and LAN). I am unhappy with the way it works and the several bugs I’ve encountered.

I don’t understand why when listening to one service, I have to go back 5 screens to be able to select another service. There is no shortcut to go back to the 1st selection screen.

I’m using Chromecast with Soundcloud often and MusicLife then controls the volume/tracks. That works pretty good and just a little short of perfect.

What I’m trying to say is that there are several things that should be ironed out and the app would be pretty good. It is not that much…

I’d love if the webplayer would sync the play queue… that is something that I’m really missing.

@Devilsears: are you sure that you’ve reset the Net and Systyem? I have a vague memory having some random behavior like that after my first upgrade and not resetting. It just behaved weird…

@surr3a1 . Yes i have done a net reset , I think i did a system reset, will do that again to make sure. I am on the latest firmware, I do listen to some 40-60 Minute tracks that will just randomly stop. It isn’t like its been ripped badly either as the track will play fine sometimes. And only happens occasionally. It maybe my NAS drive? I will try using a hard drive on the USB socket. Everything is hard wired i don’t use wireless. Regarding the music life app i am using it on Android 10 when i bought the amp the App wouldn’t even run on my Android phone, So there is a big improvement

@Felix I never had much luck with the Dirac Live, I use the calibrated Mic file from Arcam and the mic from the box but whenever i set it up it all sounds very flat to me.

I hear what you say about alternative apps but it would be nice if the one that came in the box with the amp worked as well as them.

The default curve after the calibration is terrible, you shouldn’t use it at all, you’ll need to make your own.
Check mine, I’m following the general curve but at it’s top line. I’ve given the vocals a little more presence and I can tell you that this has only benefits and nothing degrading(still playing with it). If you use the default curve it sounds flat and somehow under a blanket… 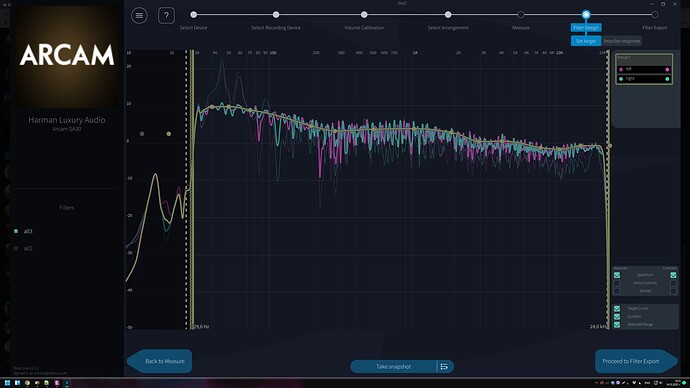