Hi,
Can you share your thoughts about favourite target curve for SA30 for listening music?
I have tried many target curves and no one is ideal for me.
Tested:
Default Target Curve in Dirac Live app
Harman Default Target (included with mic cal files)
NAD Targets
Harman “Bass boost” targets 4,6,8,10
Targets created in ASR forum

What are you favourite? (for music, especially rock)
Actually using +4dB to -4dB straight line from lowest to highest frequency

I found it super hard for me and confusing how it works. I paid actually 200 GBP for a professional setup online and now I am happy. Also had to get a new mic and the process works bit differently for each of you- every speaker is different and to me there is no way to apply standard graph. Plus Dirac puts the graph a way below and it sounds super blurred

What kind of microphone did you buy? UMIK-1?

Yes- MiniDsp. I can give you the contact details of the guy that helped me. Its not cheap, but it works really good

It wasn’t Terry Ellis from ‘Pursuit Perfect System’ by any chance?

Yes, it seems he is known

@Absinth can you share a screenshot of your curve? Interested to see what they did there.
I agree that each curve should be adjusted individually, but usually it’s anyway based on something. Either one of the ready curves, or natural response of the speakers, with only room response corrected.
I’m using standard Harman and NAD curves, but adjusting them to suit my speakers, but also my taste.
Modified NAD curve:

image1380×677 75.8 KB
Lows bumped same way as in original NAD curve, little dip added around 30Hz not to stress speakers and amp too much, and a bit flattened mids. In general following natural speaker (and room) response.

Again low end modified to (not to closely) follow speakers and room, rest of the curve is very slightly modified.
Interesting fact - speakers are Monitor Audio Gold 100 5G. Normal response ends on 40Hz -6dB. However with ports closed and DL… well, you can see on the curves. It’s not perfect, but somehow manages to go really down, and there’s no indication of any strain/issues/distortion with normal listening. No bad for not too large standmounts

How about treble? Is’nt annoying? at 4kHz and above 16kHz? Target curve is so flat at these frequencies

These curves are less and ideal! You shouldn’t deviate as much from the original as it will sound very very different.
Try to follow your natural curve more closely and just smooth it out. I’ve reduced some of the lows here and added some high end(this is with a sub and LS50 Meta). If you change the 300-600 section that will affect each and every vocal and will have the respective effect compared to No curve.
Mine is by no means perfect and I’m still testing but basically what I’m trying to do is:

Make a curve and save it to a slot then edit a little bit here and there and save it to the next one. Compare both to the No curve and repeat until you get something that sounds good to you. Following the natural curve will give your filter a better start to change only the frequencies that you want and not everything.

Remember that this is not only a room correction, this is the most detailed EQ you’ll ever get! 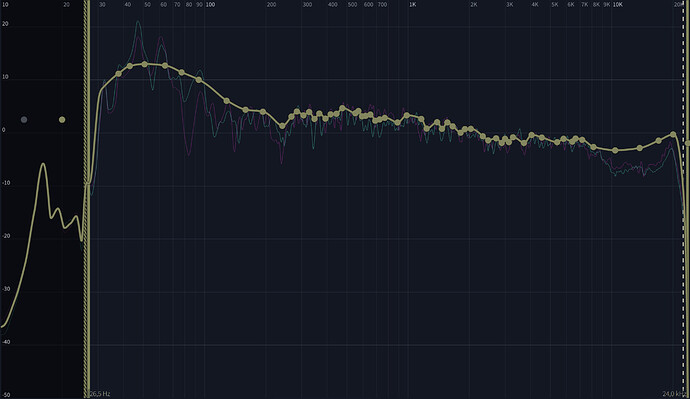 How about treble? Is’nt annoying? at 4kHz and above 16kHz? Target curve is so flat at these frequencies

That’s why i said before, it’s also a matter if taste. It sounds good to me, but i always preferred brighter sound i guess. Anyway it’s not annoying, but that might also have something to do with my speakers. They are using AMT tweeters, which i find very fast and detailed enough, without being harsh. Some domes can be more detailed, but also harsh at the top end, especially ones made from metal. Also “regular” ribbons can be harsh, but at the same time can produce some outstanding holographic effects.

These curves are less and ideal! You shouldn’t deviate as much from the original as it will sound very very different.

So? That’s the point of me changing the curves - so that they sound as i like, even if it’s not exactly following the speakers response.
And that’s the beauty of DL - you can get get whatever you want/like. To some extent of course.
I tried for example curves built based on measurements of different speaker, and it was really nice experience - you can try that one day. You’re tired of your speakers? “Build” yourself a pair of B&W’s or KEF’s. Ok, it will not be the same, close enough.

I didn’t realize that these are your final curves the way you like them - nothing wrong with that of course. If it sounds good for you, then everything is as it should be.
Enjoy!

After reading your posts, I have modified my +4dB to -4dB target slightly.
Adjusted target beetween 40-100Hz to match more closely to speakers response.
Now I like it. SVS Prime Pinnacle 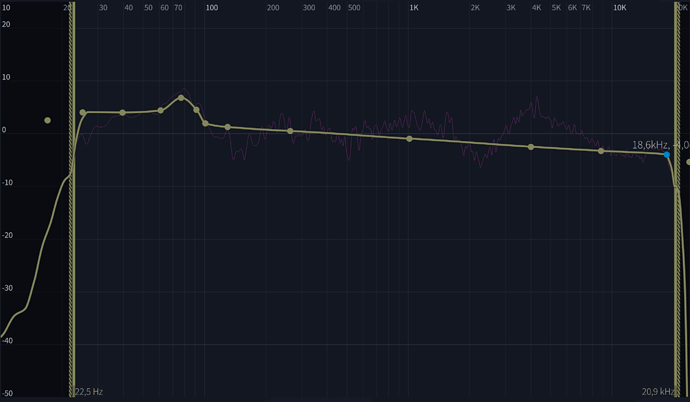 Thanks for sharing your targets!

I didn’t realize that these are your final curves the way you like them - nothing wrong with that of course. If it sounds good for you, then everything is as it should be.
Enjoy!

Thanks. I am enjoying, but i never said it’s mu final curves - still experimenting when i have time

But for now settled on those, as they do sound good to me. As said - experimented with simulating other speakers, using “out of the box” curves, made some on my own (for example some almost flat). Even small changes can change sound significantly. For example flatter high end (i mean much less slope) can be irritating in some recording, but in some sound really good, and in all it produces better sound stage/holography effect.
That’s why i dare you to experiment and find own sound, instead of settling on one curve. With DL it’s very easy, and results can be from bad to great, with a lot of surprises.
Basic DL curve is really dull, and i can’t blame people saying DL is not good, if they only used this one. Most popular are Harman and NAD curves, but there are others, like the ones made long time ago by Olive and Toole.

Here one of the adjusted graphs- my speakers are flat, so we followed them with some adjustments in the low and high frequencies. I have an open space next to the right column so the two speakers have individual curves

That dip at ~37Hz is very deep. You shouldn’t try to fill all of it, as it may introduce rather bad distortion when listening at higher level. I would add a point there and lower it by few decibels, similar to my graphs.
I’m sure it works ok on lower levels though.

I agree with you. Overall its sounds a bit bassy to me, so will lower the graph anyway. One thing I noticed is that no dirac gives me a better stage, bot sure where it comes from. Also the very low end sounds a bit wider. 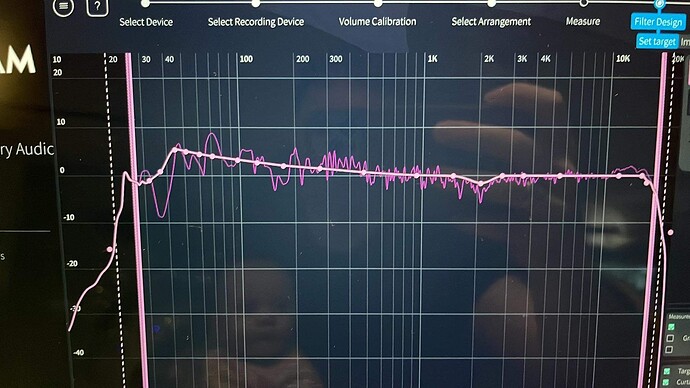 This one looks better

What do you mean by better stage?
In my case stage is a bit wider without DL, but it’s only because everything is in a way out of focus. With DL on, everything is tighter, more focused, hence stage is narrower, but at the same time in general it’s better. Positioning of musicians on the stage with DL is much better for me.

Btw- do you know if Dirac allows to lower the entire graph with all points at once?

Could be. I actually noticed, that “amount” of heights impacts also the stage when experimenting with DL. That could explain for example very good imaging of the B&W’s.

Btw- do you know if Dirac allows to lower the entire graph with all points at once?

Not that i know of. But why would you do that? It would be effectively just… lowering the volume.
Now if one could mark/choose several points and move them, without moving others - that would be very useful.

It to not push the speakers above their levels. Its advisable to apply dsp down the dBs rather then going above. So ideally, we should look where we have some of the lowest points and make them highes on the graph. Not sure if you got it.