ARC: audio and video are not in sync, ref#52

You’re right the issue is not solved completely, therefore it shouldn’t be closed.

have you tried to approximately level match the two signals?

The way I measure the video and audio are out of sync in this issue is rather subjective an inaccurate. I play the video listed in the topic start and I have to hear and see if video and audio are in sync. From what I can hear and see from this video it appears that with build 705 the audio and video are in sync within the 0 ms section (refer to red arrow in screenshot below). When I reported this issue with build 521 it was in the +60 ms section. So far the ‘good’ news, with the new build you can hear the TV audio through the TV speaker and SA30. Only with this ‘new feature’ I’m able to hear that it is not completely in sync, it is a little bit off. Due to the small scale of the time axis in the video I cannot tell what the delay is in ms. I do not now how to measure this any further and tell how much ms the audio and video are out of sync. 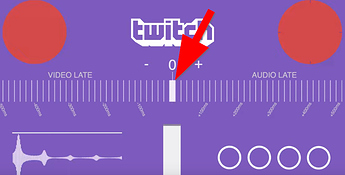 I’m no expert on the eARC stuff, but because the SA30 is not an AV-Receiver I think it can not delay the video signal because that signal is not going through the device. So to keep up with the video all it can do is minimize the delay in the audio signal as much as possible, which this release has improved upon a lot. It would be nice if the delay could be zero, but I doubt that will be reachable.

I’m no expert on the eARC stuff, but because the SA30 is not an AV-Receiver I think it can not delay the video signal because that signal is not going through the device.

I’m no expert neither but I think you’re right. Only audio is transmitted over the HDMI ARC cable. All they can do is minimize the audio delay near 0.

From what I can hear, the delay is still in the +30 milliseconds

@AleisterCrumpet Could you please specify how you performed the measurement? E.g. video footage used, steps executed and how did you read 30 ms?

With the new release similar to music video, so the delay is just noticable, but not too annoying.

All they can do is minimize the audio delay near 0.

True, unless eARC has an option for the receiver to “send a command” to the TV to delay the video, but I don’t think that exists.

Is there any news on this issue. This has been open for a year now.

From what I can see and hear I cannot reproduce this issue in firmware SA30 build 1206 version 1.7 anymore. It seems to be resolved. Maybe this has been fixed in an earlier build, I will mark this issue as solved now.

10 posts were split to a new topic: Delay on digital and analog inputs

Although merged with another topic for the sake of oversight, this issue remains unsolved, with the SA30 introducing a delay of the audio to video of 150ms+ .

Users who are looking to pair this amp with their TV should be aware of this.

Still experience this problem using my SA30 with an LG C1. Quite disappointed about this. Bought my SA30 about 5 months ago and my LG C1 1 month ago. I also have a Popcorn A500 which actually can solve lipsync problems (also when video is ahead of audio). Why can’t they do that at Arcam?

With the last firmware, you can lip-sync each input.

How does that work ?

In the menu Audio Settings, You have Lip Sync submenu and you can set 0 to 200ms to each input.

Lipsync doesn’t work if sound is lagging the video. By delaying you would make sound lag even more.

Hi new to this forum however have same lip sync problem via optical and cant get any sound via HDMI - I have borrowed a Naim Uniti Star and Roksan Attessa and no issues with lip-sync so cant be anything other than the Arcam SA30 as the the others work fine with my TV and cables. Have tried everything to get HDMI working on the SA30 but cant.

Sound delay of ~150ms is there, Arcam knows about this, they are “working on it”.
You can learn more here Delay on digital and analog inputs - #4 by eeck

Regarding the HDMI - make sure the audio mode on TV is set to PCM, auto did not work for me.

Suggest you also write to official support to show how many customers are impacted by the problems.

Hi and thanks for the reply - I did what you suggested and Iv also sent a ticket to Arcam
Still nothing via hdmi so using tv with optical at the moment- lip sync problem but I’ll have to put up with the moment.

This issue has been open since the SA30 was released. I would not hold my breath. I advise you to return the unit, unless you can live with it.

Maybe this is irrelevant but since my LG C1 is connected to my SA30 using a fibre HDMI 2.1 8K cable through eARC, I don’t have lip sync issues anymore. The eARC protocol includes lip sync as far as I know.

I managed to get hdmi / eArc working- lip sync improved but not perfect through 8k cable - as I needed the unit for tv and stereo I decided to send it back - loved it for streaming but awful for TV - just purchased the Marantz 40n which has good reviews so let’s see how that goes - thanks for the feedback!

I meant to add the Marantz 40n knocks the socks off the SA30 - plenty of power & amazing lows mids and highs and sound floods the room through my little Spendor A2 speakers - I really am amazed how good this is. Tried through TV … lip sync perfect through eArc and sound / vocals really impressive! Obviously this is my view but really worth a demo as don’t think anyone could be disappointed!