Has anyone been using a SA30 with PA 240 in a biamp set up. Let’s say if you start streaming and wake up the amp when it is in a network standby mode, does it also automatically wake up the PA 240 downstream if it is connected using RCA cables from pre-outs of the amplifier to the power amp. Is there any other connection between these 2 that could facilitate this in case it doesn’t happen automatically? I’m presuming that there is a standby mode that the PA 240 goes into if there is 20 minutes of no activity. Thank you all.

The SA30 has no trigger output, so it wouldn’t be possible to wake a power amp up from the SA30.

That is sad. I feel that a lot of Arcam amplifiers are paired with Bowers and Wilkins speakers which can dip down to 3 ohms and typically seem to sing better with higher power amplifiers or bi amp etc. The manual itself for the SA 30 which is now the flagship 2 channel amp practically invites you to bi amp with PA 240. On the other hand the biggest convenience upgrade as far as this machine is that you can practically wake it up straight from a streaming app without having to go anywhere near the system. Nowadays sometimes I just play a song on my system at home, sitting at work, just to irritate my other family members. If I biamp it means that I have to walk to the machine to physically switch something on and cannotget the machines to start singing if left on network standby status. I have to wonder if they could program to connect the machines through that RS232 ports and operate in sync.

The SA30 has no trigger output, so it wouldn’t be possible to wake a power amp up from the SA30.

That’s actually really odd, that no one thought of that.
Have actually checked P240 manual, and in fact there is no “out of the box” solution. One would need to use some home automation system.
I’m actually wondering why P240 (as well as other Power amps from this series) doesn’t have signal auto-sensing? This feature is used by majority of manufacturers now (I.e. NAD or Roksan to name just two). All current Arcam devices have some kind of signal detection circutry for auto-standby. It detects signal on active input to prevent amp from going into standby when music is playing.
Now in integrated amps it’s probably not possible to use it for auto-sensing to come out of standby due to multiplexer/input selector that is before this circuit in signal path.
But actually in Power amp it should probably be doable.
@arcam_paul maybe you could check with engineering if it is in fact doable? I guess this kind of omission can be driving some customers away from those power amps.

I certainly am one of those who would happily buy a PA 240 if there was a way to switch it on automatically in sync with the SA 30. The funny thing is almost every product that I know of had these triggers including the A49. I almost ordered a PA 240 and suddenly realized that it would mean a complete change in the way I have to operate the system. On the other hand my 804 D3’s seem to be begging for more power…

I certainly am one of those who would happily buy a PA 240 if here was a way to switch it on automatically in sync with the SA 30.

There is a way. Look for a current sensing auto outlet. Here is an example https://www.amazon.com/Oskool-Automatic-Vacuum-Accessory-Automatically/dp/B08F7QD63C/ref=sr_1_3?dchild=1&keywords=O'skool&qid=1617827202&sr=8-3

They are used to automatically switch on a vacuum when a power tool is turned on. I think when the SA 30 comes out of standby it pulls enough juice to activate one of these switches. You could buy and return if it doesn’t work. Just plug a lamp into it to test. If it works, then the PA 240 could be used in sync. But IMO, Arcam should have a trigger on the SA 30. Big over sight. Simple and cheap to include the trigger in the original design.

Hi Ken, I didn’t know about the existence of this possibility. I can think of so many different applications for this. I will certainly experiment with it.

Also, if you want the pa 240 plugged directly into the wall plug, Emotive makes this device: 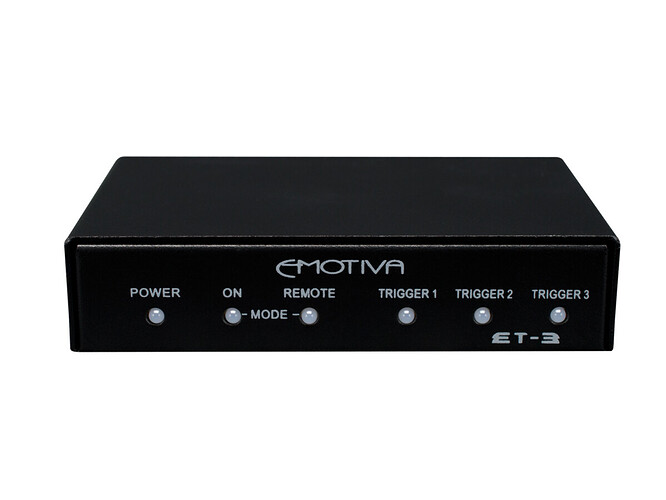 The ET-3 is a handy little device that improves the flexibility of the basic trigger functionality on your preamp or processor. Learn More ▾

It says it can be configured to switch on the triggers when it receives power. So you would plug this into the sensing outlet and use the trigger output to the trigger input of the 240.

Thanks again. This is probably the way to go if there is no other reasonable solution that way I can connect the amp and the power amp on different outlets which is what I like to do…

Unless someone chimes in with a more elegant solution, this is probably what I would do. Maybe Arcam can suggest a better solution??

It’s not really odd - I believe the power amps are typically used to drive height or zone speakers or such with our AVRs, which do have triggers. There is power sensing for standby.

It’s not impossible to pair with an amp, we do support RS232/Net/Trigger, so that is an option if you have a control system, it’s just not a typical application.

It’s definitely not a silly request, but it’s certainly the first time anyone ask asked for it.

It’s not really odd - I believe the power amps are typically used to drive height or zone speakers or such with our AVRs, which do have triggers.

Bi-amping is becoming more popular i think, and if you look at i.e. NAD you can mix and match different devices. But they are using signal auto-sensing, not only trigger. It makes it easier to integrate power amp to any setup.
So it’s odd in a sense, that you could probably sell more power amps if they were easier to integrate in different setups with rather simple addition of signal auto sensing. But that’s just probably - i haven’t done any market research

There is power sensing for standby.

Ok, so it’s not signal sensing, and no way to use it.

It’s not impossible to pair with an amp, we do support RS232/Net/Trigger, so that is an option if you have a control system, it’s just not a typical application.

And i think that’s the “cleanest” solution to make it happen, but you need external control system, and not everyone has that. And even if one has something, it doesn’t mean it will work (i.e. Home Assistant in my case), at least not out of the box. It might require some programming skills to create custom integrations.

@sree420 if you have some basic skills, you could make something out of this: 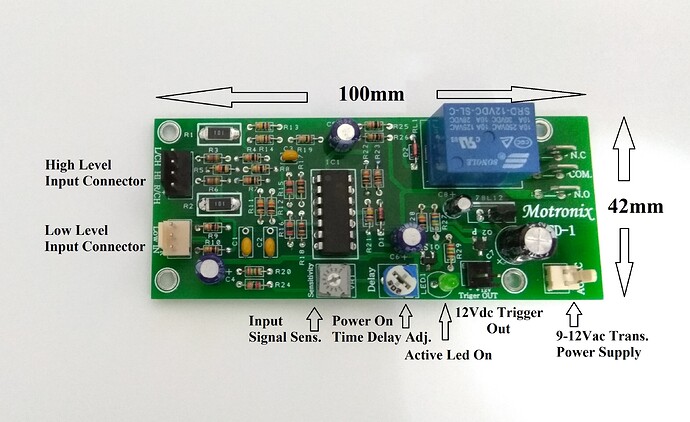 If not, try to find a ready product with same functionality (signal auto sensing with 12v trigger out).

@arcam_paul I would have accepted your explanation at face value regarding AVRs and power amps, but your previous analog 2 channel amps like A49 and A39 both had trigger outs. So clearly it’s an omission, purposeful or otherwise in the new gen 2 channel flagship amps (unless there is SA50 in the pipeline with triggers or a lot more power that will grace us in the future). While A30 is powerful it’s not enough to effortlessly drive the most popular combinations of Arcam i.e, with Bowers and Wilkins speakers. In the previous generation of A49 +P49, you could switch on the combination with a flick of a remote sitting on the sofa. This generation should have eliminated the remote and moved to the app but instead you are making me walk to the system just to switch on the power amp, this is backwards thinking.

Anyway let’s not look backwards, Primare’s RS232 can link their products to operate in sync; why can’t Arcam do that? cant you program the machines in such a way that if the RS232 of both machines are DIRECTLY connected they sense each other and power off and on in sync?

I am fairly certain that unless there is solution found for this, people will either choose things like the Hegel H390, a more powerful one box or Naim Uniti based system that can be biamped.

I’m not part of the decision making process for that, but I would urge you to contact support if you want to discuss this further.

I just want to say that I had the same idea, thinking I could eventually upgrade with PA240 to biamp my 804s - had not thought of this issue and that does make a little less likely.

Can I ask, what the sound improvements have been achieved by adding the PA240?

I am contemplating doing the same but wondered what the sound difference would be at the same listening volume. My SA30 is currently connected to ATC SCM11 speakers and a Thorens turntable.

Hello dear forum members, I am connecting to the question because I am interested in pa240 and more precisely the difference in sound when listening quietly. I understand acoustics correction is also carried out after connecting the loudspeakers to the pa240? regards